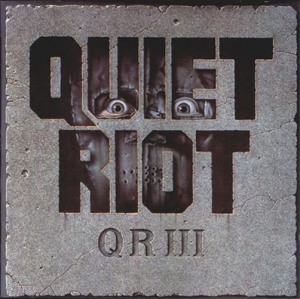 QR III is actually the band’s 5th album but I guess they aren’t counting their first two albums that were released only in Japan in the late 1970s.

I tend to think of Quiet Riot just as I think of Twisted Sister: both were solid metal bands, both had singers with powerful voices and both bands had great commercial success fairly early and then saw those sales fizzle out pretty quickly with each subsequent release. Also, when the going got tough, both bands tried using a much lighter sound in an attempt to stay commercially relevant (it still didn’t help).

Well, like I said, after the multiple platinum success of Metal Health and the disappointed of Critical Condition (it “only” went platinum), the band went with much lighter and more commercial sound in order to increase sales. This new synthesizer-heavy/AOR sound is none more apparent than on the opening track, “Main Attraction”. The first notes you hear on this album are not provided by guitar, drums or even by a bass guitar but by keyboard! The song is actually a great piece of cheesy pop-metal but I can imagine that it did the band no favors with all of the fans that bought Metal Health back in ’83.

“The Wild and The Young” is a more like the Quiet Riot of old but then “Twilight Hotel” moves back into AOR territory and sounds nothing like the band at all. “Still of the Night” is another slow melodic rock number that makes you wonder how this is Quiet Riot, but I think it’s another excellent song. “Slave to Love” is another AOR-style song but again, I like it, though I will admit the female vocals really seem out of place on a QR song!

“Bass Case” is a cool bass instrumental performed by Chuck Wright. Rudy Sarzo, the band’s bassist from the “classic” line-up had left the band in early 1985 after growing tired of Kevin DuBrow’s ego & attitude.

“Put Up or Shut Up” is a rocker that could’ve fit in on the two previous albums while “Down and Dirty” and “Rise Or Fall” could’ve been two really good hard songs but they are cut off at the knees by synthesizers and an overly polished production.

There is one song on this album (“The Wild and The Young”) that I would put up there with the rest of Quiet Riot’s signature songs. The rest is good, cheesy ’80s melodic rock. It’s not what anyone expected or wanted from this band and sure you could throw the “sell out” label on them for releasing these songs but I find QR III to be a guilty pleasure melodic rock album. The album probably deserves another look from people who stuck their nose up at it the first time around.

Highlights: “Main Attraction”, “The Wild and The Young”, “Twilight Hotel”, “Down and Dirty”, “Still of the Night”, “Slave to Love”

Buy the album at Amazon.com

Being a mid-90s W.A.S.P. album, I wasn’t expecting much from Still Not Black Enough, which really isn’t fair because Blackie came come up with at least a few decent tunes every album. The album was originally intended to be a solo album for Blackie but he later decided to put the W.A.S.P. name on it (for purely financial reasons, I’m sure).

Regardless of the name on the cover, it’s always going to have a hard time NOT sounding like W.A.S.P. because Blackie IS W.A.S.P. It really doesn’t matter who is backing him up, it’s Blackie’s band and he’s the sole creative driving force so solo or not, there’s a certain sound any of his albums are gonna have. I’ve always found this especially true when it comes to the drumming.

There’s a couple of songs that are most definitely W.A.S.P.y — “Still Not Black Enough”, “Black Forever” and “No Way Out of Here”, and the cover of Jefferson Airplane’s “Somebody to Love” are obvious W.A.S.P. rockers but there’s some nice variety to this album as well. “Keep Holding On” and “Breath” are tender ballads you definitely wouldn’t expect from any album labeled as W.A.S.P., but they are cool tunes and show Blackie trying a different style of vocals and I love the lyrics on “Keep Holding On”. “Rock And Roll To Death” has a ’50s rock ‘n’ roll much in the same vein as “Johnny B. Good”. “I Can’t” is a good mid-tempo bluesy number that turns into typical W.A.S.P. when Blackie starts dropping f-bombs.

Overall, this is a very good disc that features Blackie spreading his leathery wings once again while still throwing in enough typical enough sounding W.A.S.P. tunes to keep the faithful interested. After hearing this album, I’m convinced more than ever that Blackie is one of the more underrated artists in the metal realm.

What ticks me off about this album is I ordered it online and discovered it was the 2001 reissue, I saw that the original U.S. release features covers of Queen’s “Tie Your Mother Down” and AC/DC’s “Whole Lotta Rosie” as well two other Blackie originals! That sucks they didn’t make the reissue. Oh well, that’s why they invented YouTube…

Another outstanding release from Retrospect Records, which despite primarily being an 80s rock/metal reissue label, are proving themselves when it comes to new material as well (see Wildstreet).

Freakshow is a supergroup of sorts featuring M!SS CRAZY’s Marcus Allen Christopher, Cinderella’s Jeff LaBar, Quiet Riot’s Frankie Banali. Rounding out the group is Tony Franklin, who is no stranger to supergroups, having played in The Firm, a collaboration between Paul Rodgers and Jimmy Page. He also has been in Blue Murder, Whitesnake and played on Rehab, the final Quiet Riot album.

Given the band members, the sound of Freakshow is not what I expected. I was expecting a more classic rock/80s rock vibe and that sound is not entirely present here. In fact, the album very much has a fresh hard rock sound, just check out the incredibly infectious, mean and Zeppelinesque “It’s Really Over”. In a world that was fair and just, that song would be all over radio right now.

On the surface, the band looks like a bit of a mismatch. Marcus Allen Christopher sticks out like a sore thumb with his face paint that makes him look like he belongs in a Norwegian black metal band, but all that really counts is the music and the music is great. I also love his voice, which can really wail and sometimes reminds me of Robert Plant.

Hopefully, this isn’t just a one-off project of Christopher’s (he wrote all the songs), because this is one of the year’s best releases and I look forward to more Freakshow albums in the future.

I was really surprised by how good this album was when I picked it up. After hearing about how bad most QR albums had been post-Condition Critical, I wasn’t sure what to expect. I had read many interviews leading up to this from Kevin DuBrow and Frankie Banali talking about the strong 70s rock influence on this album and they were right! They consciously avoid doing any type of party-metal anthems they made it big on and deliver a solid platter of classic sounding hard rock.

The 1970s influence is especially apparent on “Old Habits Die Hard” and obviously, the Spooky Tooth cover “Evil Woman”, which features a great duet between DuBrow and Glenn Hughes (who also co-wrote a few songs). Kevin’s voice, by the way, is as strong as ever throughout the whole album. He’s always been one of my favorite rock vocalists and matches his early 80s performances here.

Interesting to note that guitarist Neil Citron and bassist Tony Franklin played on the album, but soon after recording, both were out of the band and never played one of these songs live! They were replaced by returning QR members guitarist Alex Grossi (originally played with QR 2004-2005) and QR’s “Fifth Beatle”, bassist Chuck Wright (who has joined & exited the band numerous times since 1982).

Two unfortunate things tied to this album though:

First, the rest of the classic QR line-up, Rudy Sarzo and Carlos Cavazo, were not involved in this project (and hadn’t been involved with the band for a number of years). More important and tragic than that though is the passing of Kevin DuBrow on November 25, 2007, of an apparent accidental cocaine overdose. It makes the title of this album, the final Quiet Riot album, pretty creepy and sad.

I believe Frankie Banali is now the sole owner of the Quiet Riot rights and name. He had this to say in January 2008 about the future of the band without Kevin DuBrow:

“I have been approached to see if I would be interested in contacting Rudy Sarzo and Carlos Cavazo and to audition singers for Quiet Riot. I have also been approached to see if I would be interested in contacting and reforming the version of Quiet Riot that included Paul Shortino, Carlos Cavazo and Sean McNabb. Let me make this very simple and perfectly clear. While I am still actively involved in the business interests of Quiet Riot and will continue in that capacity, I reject any and all suggestions to have Quiet Riot continue as a live performing entity. My friendship, love and respect for [late Quiet Riot singer] Kevin DuBrow as well as my personal love and affection for Kevin’s mother and his family makes it inconceivable for me to ever entertain any ovation to reform or to continue Quiet Riot . Kevin was too important to go on without him. It would also be a disrespect to the fans who have supported Quiet Riot for nearly 25 years. I thank everyone for the wonderful and sometimes unpredictable adventure that I was able to share as a member of Quiet Riot . The only regret that I have is the loss of Kevin. May he rest in peace. I now begin life after Quiet Riot.”

With the passing of Kevin, the music world lost a great champion of rock and a great rock ‘n’ roll band. Quiet Riot was never going to have a hit album or single again, but they proved with Rehab they were still relevant to the hard rock scene, with a release that is almost universally accepted as being right behind Metal Health in their catalog, and I was hoping to hear many more new albums from them for years to come.