Sweet & Lynch – Only to Rise [Review] 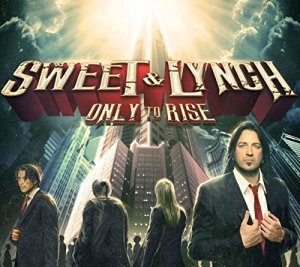 Sweet & Lynch – Only to Rise
2015, Frontiers Records
Buy the album

Sweet & Lynch is supergroup in a long line of supergroups put together at the request of the Italy-based melodic rock label Frontiers Records. The difference this time is that I can actually pronounce the names and know who all of these guys are! Also, in contract to many of Frontier’s other all-star projects, Michael Sweet offered to take over as producer and he and George Lynch co-wrote all of the songs. Generally, for these label projects the album would use outside songwriters and producers.

Looking at the band roster I have to say that Sweet & Lynch is as strong of a rock supergroup as there has been in awhile. While Stryper’s Michael Sweet and Dokken/Lynch Mob’s George Lynch are obviously the focal point, the names of bassist James LoMenzo (White Lion / Megadeth / Black Label Society) and journeyman drummer Brian Tichy (Whitesnake) should be recognizable to more than a few hard rock fans.

As for the music, Sweet Lynch stays within the realm of what made them popular. I wouldn’t put this album on the level of the last few Stryper & Sweet solo albums, but fans of Stryper, Dokken and/or Lynch Mob, should find no trouble enjoying this melodic hard rockin’ album.