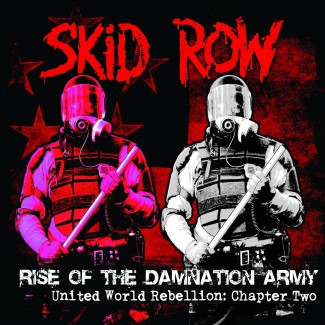 Skid Row is back with the second installment of their United World Rebellion series of EPs, which I think is meant to be a trilogy. Personally, I think this is a great way for bands to go about releasing music — a steady stream of EPs and then maybe do a double or triple disc compilation later down the line.

Not sure why it took these guys seven years before they released new music but a fire has certainly been lit under them. I never bothered with Thickskin or Revolutions Per Minute because both albums were reviewed by mostly everyone as being poor or mediocre, but the United World Rebellion series shows the band still has a snotty punky attitude and continues to show why they were one of the heaviest of the “hair bands” back in the early 1990s. “We are the Damned” is a true headbanger and the best track on the album. Though I enjoyed the first United World Rebellion, I was caught off guard by how good this track is.

The band wraps up the second chapter by superbly covering a few Queen and Aerosmith classics. If you’re looking for something the band to try to recreate the past with some glossy hair metal, you’re not going to find it on these recent EPs but what you will get is good solid heavy metal and hard rock. If this is the type of music the band continues to release, I don’t have any interest in ever seeing them reunited for a nostalgia run with Sebastian Bach (who I happen to like as a solo artist anyway).

Highlights: “We are the Damned”, “Catch Your Fall”, “Zero Day”, “Sheer Heart Attack”, “Rats in the Cellar”