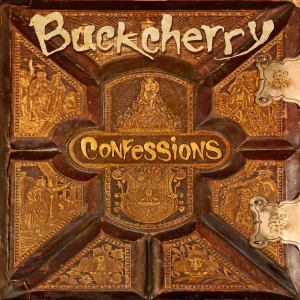 I find it hilarious that a bunch of heavy metal knuckle-heads are up in arms that Century Media had the audacity to sign Buckcherry and release one of their albums. The truth is Eleven Seven Music has licensed out the North American rights for Confessions to Century Media. Regardless, I’ve seen the ignorant comments on Facebook, YouTube and various metal sites claiming that Century Media is a label for “true metal” (whatever that is) and that Buckcherry are nothing more than “hair metal posers” that “suck” and that they don’t deserve to be associated with a metal label such as Century Media.

Well, maybe Century Media wants to expand their musical horizons beyond the likes of Finntroll, Necrowretch and Vattnet Viskar? If you don’t like Buckcherry, don’t listen to them! Simple as that. You’ll certainly never see me buying a Winds of Plague album.

Label controversy aside, when I heard Buckcherry was planning on releasing a concept album, I was a bit skeptical. I’m a huge fan of all of the band’s albums but I DON’T like concept albums at all. Plus, Buckcherry isn’t really the type of band you’d think would ever release a concept album. I suppose Confessions is really more of a theme album though. The theme? The seven deadly sins. “Okay, cool,” I thought to myself, “I can see a band like Buckcherry making that work”.

But Confessions doesn’t just “work”. It excels. The lead single “Gluttony” is 100% Buckcherry. It’s what you expect from the band. Bratty, sleazy and in-your-face. It’s an anthem. The rest of the album takes a slightly different tone. The lyrics are darker (written by Josh Todd, they are autobiographical) and the music is bit more serious. I’ve seen a number of other reviews state that the band has traded riffs for melodies and while I hope there’s a balance to be struck on future albums, I had to agree in reference to Confessions.

Songs like “Pride” (my favorite song from this album) and “Envy” (which should be released as a single at some point) are fine examples of the band imploring melodies instead of great riffing. Still, songs like “Gluttony”, “Wrath”, “Seven Ways to Die” and “Lust” supply the guitar goods.

When I first listened to the album nothing other than “Gluttony” struck me as a Buckcherry song. Listening to it now, the whole album has grown on me. I love it. It’s going to be tough to beat this as the best album of 2013 but it is a bit different than anything the band has done before. I mean that in a good way though. There aren’t really a lot of singles here. While the songs are definitely appealing, none of them seem like they were written with commercial appeal in mind. This is an ALBUM that needs to be listened through again and again.

The deluxe CD edition comes with a bonus DVD but I mostly bought it for the two additional bonus tracks that come with the CD. “Give ‘Em What They Want” and “When The Fire Starts” are both great riff rockers much more in the typical Buckcherry vein. I can see why they didn’t make it to the main album, not because they aren’t good but because they don’t fit in with the sound of Confessions. For a few bucks more and two awesome songs, the deluxe edition is well worth seeking out.

No matter the format, Buckcherry has delivered what might be their best & most consistent album to date. This isn’t a party album like their previous releases have been but it’s still a great rock record by one of the best rock bands going today.

Highlights: ALL OF IT

Buy the album at Amazon.com