Hinder – Welcome to the Freakshow [Review] 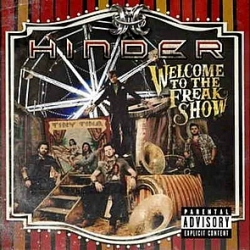 This album is full of safe laid-back almost country-sounding pop ballads and “rock” songs that would sound better on a pop station than a rock radio (“Wanna Be Rich” is pretty much dance pop). It’s not that this is a bad album. Hinder is very good at writing slick commercial hard rock songs but this isn’t what I was hoping for after All-American Nightmare. I really thought the band was coming into their own with that release, sounding freer, more melodic and fun than most modern rock bands. I remember that with the past two releases, the band talked about how they were being more like themselves. Well, I guess that’s all out the window now because this is a cash-grab.

There are a number of songs here I enjoy but nothing here packs the same punch as previous songs like “Striptease”, “Use Me” or “Up All Night”. The evolution of this band has been interesting. They seemed like they were going from a generic post-grunge act to becoming more of a modern sleaze rock band than anything else but Welcome to the Freak Show sees them regressing back into post-grunge while throwing in some country/pop and rock/pop for good measure (the lead single “Save Me” even features some rapping). This album is the sound of a band trying to regain a following by any means necessary.

Though a shameless attempt at revitalizing the band’s career, it’s a decent album; just not a memorable one.

Buy the album at Amazon